It’s pregnancy update time!  In my weekly update I share what’s happening in my pregnancy journey with you.  This includes general stats such as how I’m feeling, any symptoms I’m experiencing, food cravings and aversions, weight gain, bump shots, etc., as well as what’s going on in my life that’s pregnancy-related and any baby things we’ve purchased or received as gifts.  Here’s the scoop at 24 weeks: 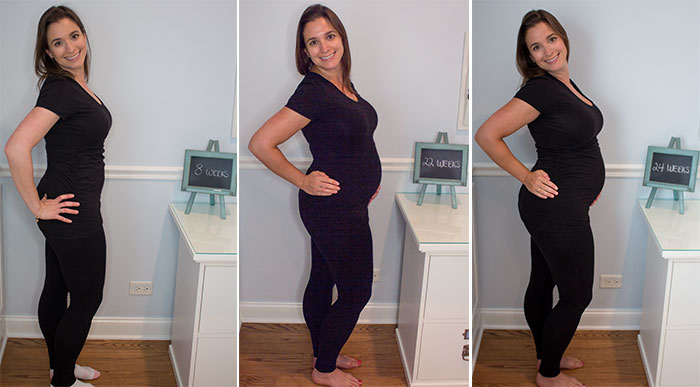 Hmm…I’m not noticing a huge amount of change in the bump and there’s a two week gap between the middle and the righthand picture in that collage.  It feels bigger to me, although I agree it doesn’t look much different.  I know Baby Girl is growing though because I can feel her movement much more distinctly and can even tell (more or less) which way she’s situated.  She’s definitely been on the move lately!

This update will cover the last two weeks since I skipped my post last week while away on our babymoon vacation in Hawaii.

❊ Symptoms – The itchy breasts and frog-in-the-throat acid reflex I mentioned a couple of weeks ago have subsided for the most part.  When the frog-in-the-throat pops up, usually sometime between dinner and bed time, I just take a Tums and I feel better.  I did experience an increase in feeling physically uncomfortable on our long flight legs to and from Hawaii, but nothing unbearable or that couldn’t be cured by stretching and getting up every now and then.

❊ Physical Changes – The bump feels bigger, it just doesn’t look much different, although I certainly gained weight while we were away!

❊ Weight Gain – 5 pounds (19 total) – I’m actually pretty surprised by this as I was expecting to gain more while we were away thanks to all the naughty food I ate.  That’s about how much I typically gain on a vacation that long when I’m not pregnant.  I did stay active while we were away between using the elliptical most every day and swimming a lot.

❊ Mood – Super relaxed and happy.  12 days in tropical paradise will do that, though!

❊ Sleep – 8-9 glorious hours a night with the exception of our overnight flight home where I only slept two hours in one 24 hour period.  Luckily I bounced back from that quickly!

❊ Food Cravings – The sushi craving hit me hard when we were in Hawaii.  I realized it wasn’t so much that I wanted raw fish, but more just the experience of eating sushi (and soy sauce! Yum).  It took me a week to figure out I could still eat sushi so long as it didn’t have any raw fish in it.  I happily devoured veggie, shrimp tempura, and crab rolls during the second half of our trip and felt totally satisfied of that craving by the end.  I also ended up eating quite a lot of pancakes, which is something I normally only feel like once in a blue moon.  Let’s just say I didn’t hold back on this vacation. 😉 (That bottom right picture is actually french toast, if you’re wondering) 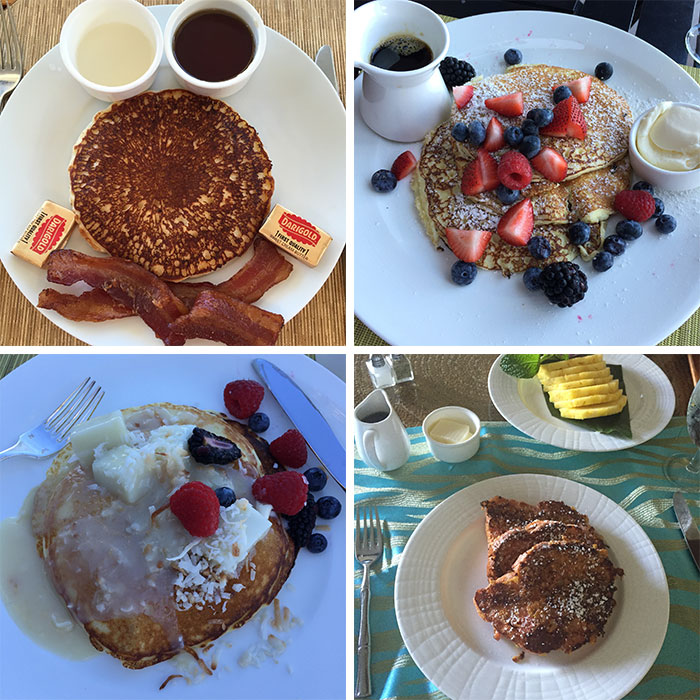 ❊ Food Aversions – Fish.  Even in Hawaii where I was surrounded by the freshest fish, I still had no interest in it.  But my aversion wasn’t so bad I couldn’t be near it, which is good because then Don could enjoy it without me running for the hills.  I’ve also noticed I’ve grown increasingly less keen on meat or poultry in general.  I’ve been trying to compensate with non-animal proteins when I can.

❊ Missing – Now that we’re back from Hawaii I miss those beautiful sunsets and the peaceful calm I experienced there, but honestly, I’m super happy to be home and back to my routines.  Plus, I missed my Winnie girl quite a bit while we were away and it’s so wonderful to be reunited with her.

❊ Looking Forward To – Ordering our nursery furniture.  I did quite a bit of research while I was in Hawaii and had lots of time and am now ready to make some decisions.  I plan to visit a local shop later this week to see my top brands in person and hope to place an order at that time.  I feel like I’m cutting it a bit close, because some pieces can take up to three months to arrive and there’s less than 16 weeks left until my due date.  I’m not too worried about it since Baby Girl will be sleeping in our room for at least a little bit (not in our bed, but in a bassinet), but it would be nice to have the nursery set up before she arrives.

❊ This Week’s Happenings – Like I mentioned, I’m planning on nursery furniture shopping this week as well as starting my registry.  My sister-in-law, Emily, is very sweetly throwing me a shower in November and I’ve been told it’s time to get cracking on that registry!  In addition to researching furniture while I was in Hawaii I learned a lot about baby gear and narrowed down the things I’d like to have before Baby Girl arrives, so now it’s just a matter of picking a place to register and getting on with it.  Our plan is to register for mostly smaller, less expensive items and purchase the big ticket stuff ourselves.  Exciting baby shopping times ahead!

I talk more about my week in this video if you’re interested:

Please let me know if there are any other stats you’d like me to add to the list.  I’m happy to share!
Thank you so much for your well wishes, kind words, and helpful advice.  I appreciate your support so much!
((HUGS))