I can’t tell you how thrilled I am to finally be able to share about my pregnancy with you.  Three and a half months is a long time to keep such a big secret!  Thank you so much for all of your kind and enthusiastic comments after our big announcement last week.  I am blown away by your sweet support!  I am so, so happy to be able to share this exciting journey with you.  Today I thought I would talk more about my first trimester, including how we found out I was pregnant, our first two prenatal appointments, and how I’ve been feeling. 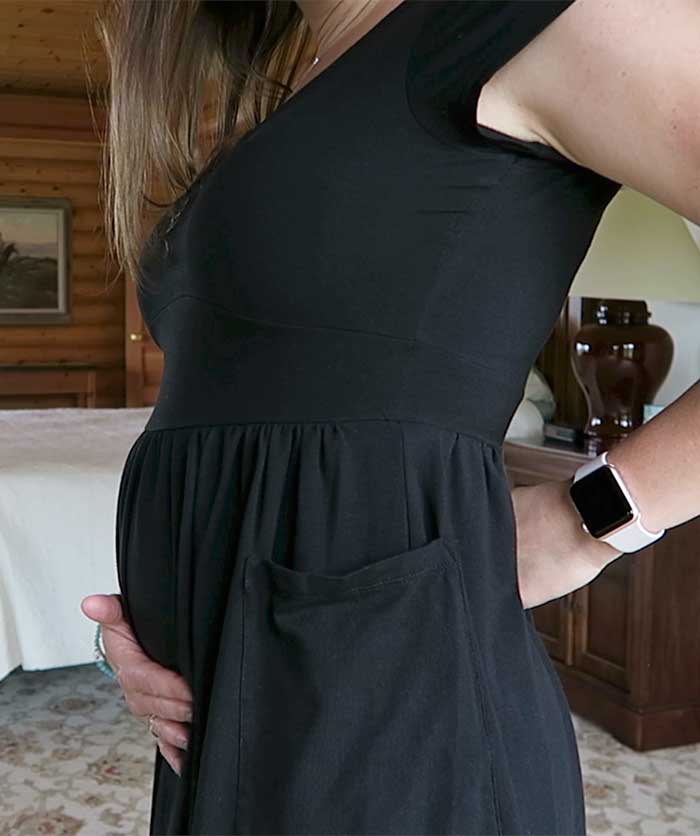 Don and I always knew we wanted to have two kids.  It took some time to successfully conceive with our first, CC, so it was important to us to start trying as early as possible for baby #2.  A two year age gap was the minimum I was personally comfortable with.  Also, considering I didn’t even start cycling again until last December, I wanted to give my body at least a few months to regularize, which it quickly did thanks in part to acupuncture, something that helped me immensely in my preconception journey with CC.

In addition to feeling physically ready, I took some time to get in the right frame of mind for what could be another challenging preconception journey.  I firmly believe that having the right mindset makes a world of difference in matters of the body.  I did not expect, however, to successfully conceive on the first try.  You could have knocked me over with a feather when I realized I was, in fact, pregnant.  It took three pregnancy tests over the course of a week for the reality to settle in, because I just couldn’t believe it!  You truly never know what is going to happen when it comes to conception.  Life is full of surprises!

We found out the good news when I was just barely 4 weeks pregnant.  We told our immediate family the following week and then at 6 weeks I went in for my first prenatal visit and scan.  There’s nothing quite like seeing your baby and hearing its heartbeat for the very first time!  It is pure magic.  I did the usual panel of blood tests they do at that point and everything came back healthy and normal.

At 11 weeks I went in for a blood draw to test for chromosomal abnormalities.  After a nail biting week we finally got the results back that all was normal.  We also found out the baby’s sex from that test.  Don was really rooting for a boy.  I didn’t realize I had a strong opinion about the gender, but wept happy tears of joy at learning I’m carrying a boy.  It feels like the missing piece to our family puzzle clicked into place at that exact moment.  The whole family is overjoyed at the news as well.  We feel so blessed to have both a girl and a boy in our little family of four.

I had my second prenatal visit with my doctor and scan at 13 weeks.  It’s amazing to see how much the baby grows and develops in just a couple of months!  Everything checked out fine at that visit.  It was such a blessing to see our baby doing flips and moving his little legs and arms around for us during the scan.  We were even able to confirm he was a boy (the evidence was indisputable 😉 )! 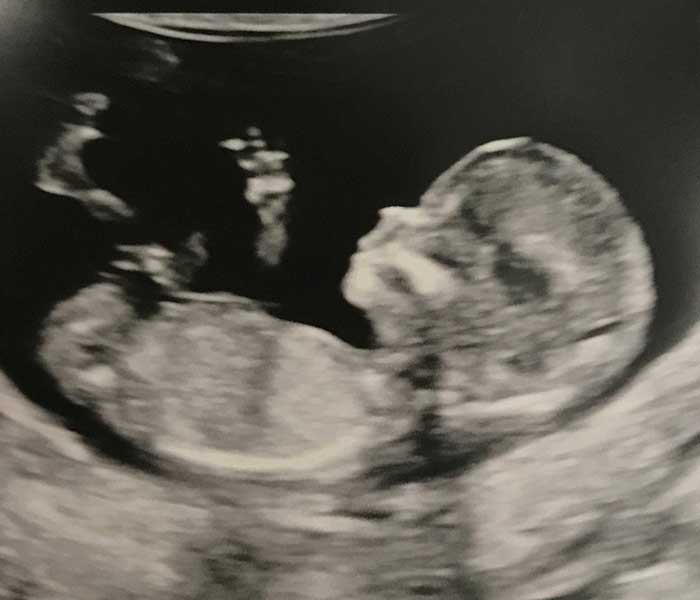 Introducing our baby boy!  This scan was taken at 13 weeks.  He is healthy and doing great.

I started feeling nauseous and super tired almost immediately after discovering I was pregnant, which is quite different from my experience with my first pregnancy.  I felt great for the majority of that pregnancy except for spotting and a scary bleeding incident in the first trimester that sent us all into a panic but just ended up just being a non-threatening clot.  Happily, I haven’t had even any spotting, which is considered quite normal during the first trimester, with this go around.  As much as it sucks to feel sick and tired all of the time, the silver lining for me was that those symptoms are perfectly normal and indicated to me that things were progressing well.

The nausea persisted all day every day for 14 weeks and has started to wane only now at almost 15 weeks.  I still get waves of it every once in awhile but it is a welcome break from the constant onslaught of the last three months.  My exhaustion peaked between 8-10 weeks.  I’ve actually felt pretty good for the most part in that department since.  Of course, I tire more easily than before but having good energy more often that not has been huge for me, especially as I run around after an active 19 month old.

Other, more minor symptoms I experienced included increased shedding for the first 12 weeks or so.  It wasn’t quite as pronounced as the 3 month postpartum hair loss I had after CC was born, but it was definitely noticeable and much more than usual.  I also shed about a third of my eyelashes within the first 6 weeks, which happened when I was pregnant with CC as well.  My skin has stayed pretty clear for the most part with the exception of a couple of minor breakouts, much like during my first pregnancy.  Another similarity was how super bloated I was for the first 8 weeks.  All par for the course, as we like to say!

I’ve already experienced some cravings, including one week where I desperately wanted sour punch straws, only to finally get them and decide they were disgusting after eating just one.  I also went through the same bite size Tostidos period as with my first pregnancy, which I enjoyed making into nachos with shredded cheese melted on top.  Oddly enough they could only be the mini Tostidos!  No other tortilla chip would do.

In general, my appetite was pretty off for the first trimester due to the constant nausea I experienced.  I couldn’t eat first thing in the morning or much after 5 PM which is when I felt the sickest.  Even now that I am feeling better I find my appetite is the most pronounced from 10 am to 4 pm.  I haven’t developed any vehement food aversions just yet, although I haven’t been overly fond of meat and fish is well off my menu.  My sweet tooth has taken a back seat to my current preference for salty foods.  I find myself eating a lot of hummus and salads these days.  And the occasional milkshake, of course. 😉

My belly popped out seemingly overnight around the 6 week mark, and it’s not suck-in-able pudge – it’s a hard baby belly!  I’ve heard lots of women show earlier with their second, especially if you have your kids close together when your body hasn’t fully pulled itself back together yet.  Also, having had a c-section with CC where they literally cut through my abs makes for a looser abdominal wall which will show a bump much sooner than a tight tummy.  I don’t mind showing early, but it didn’t save me from feeling self-conscious and pudgy throughout my first trimester.  I remember feeling the same way with CC, too.  I’m starting to feel more body confident again thankfully!  It’s not fun feeling down in that way.

One of the best parts of the first trimester aside from the scans and healthy test results was feeling him move for the first time just at 13 weeks, which is much sooner than I did with CC.  Again, this is very common for second pregnancies.  I think it’s mostly because I now know what it feels like!  It’s super subtle at this stage, just fluttery butterfly wings inside my lower abdomen.  I’ve been able to feel him about every other day for the past two weeks and only when I’m in a semi-reclined position and really paying attention.  It’s such an amazing gift!

Fortunately, the timeline of the pregnancy aligns almost perfectly with my first so I have two bins worth of maternity clothes to cover all the seasons in which I’m pregnant that I can wear again, festive holiday t-shirts included!  I did have to purchase some new maternity pants because I found the ones from the last go around are so stretched out they’re way too loosey-goosey to wear right now, but they’ll work out great in my third rimester when I’m a lot bigger.

All in all, I’m doing great with no serious issues thus far and mainly because I have a healthy fetus who is growing leaps and bounds every week.  Yes, it is tough being pregnant with a toddler to take care of at the same time, but it is a blessing that I do not take for granted and I am beyond grateful that CC will have a little brother next February (or January, depending on when he decides to make his debut!).

I don’t plan on posting weekly updates as it’s a bit more than I can handle content-wise during this busy season of my life, but I will check in from time to time and keep you posted, as well as share any other fun baby related things such as hauls and a nursery update (yes, he will have his own room right next to his big sister!).

I talk more about my first trimester in this video if you’re interested:

I know I’ve said this already, but I cannot emphasize just how excited I am to share this journey with you.  Thank you for being a part of it!  It means so much to me.  I hope you are all well!  Take good care 🙂