Surprise!  I am beyond excited to announce my pregnancy.  I have dreamed, wished, hoped, and prayed for this for so long and my heart is filled with joy that I am finally able to share this good news with you.  I plan on continuing to share throughout my journey, but first, there’s a lot of catching up to do! 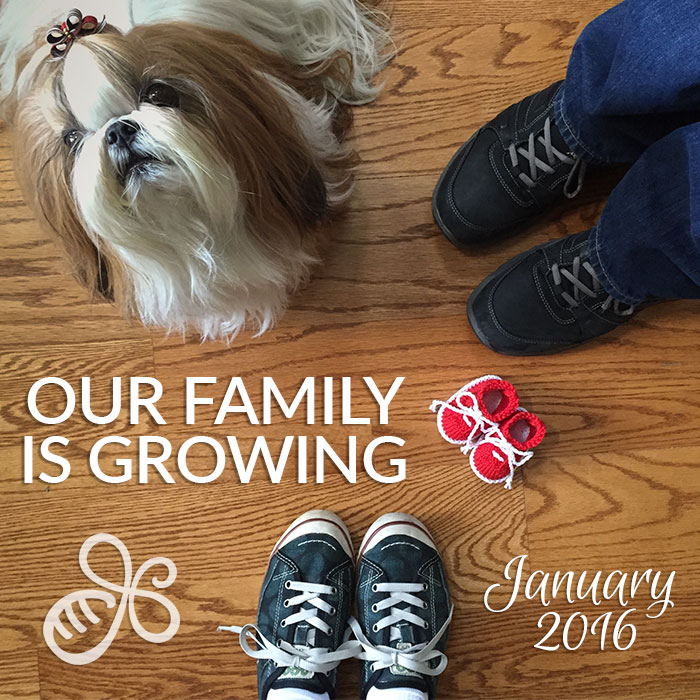 I am 14 weeks along as of this past Sunday and now officially in the second trimester.  This brings me such relief!  I feel like I can finally get really excited about my pregnancy without quite so much anxiety weighing me down.  I felt very nervous throughout my first trimester, but I’ll get into the reasons behind that in a moment.  First, I’d like to share about finding out I was pregnant at last. 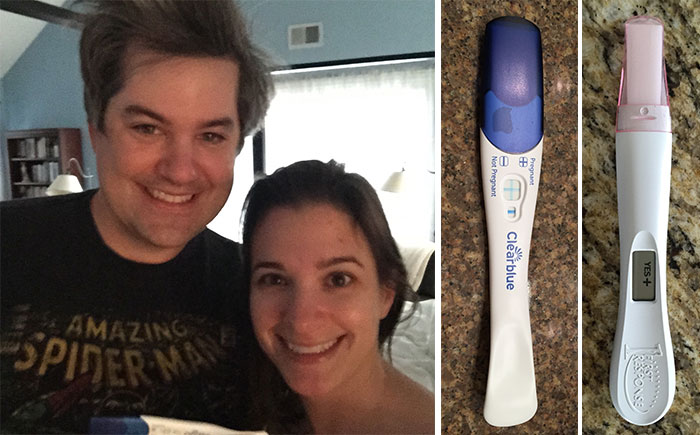 My husband Don and I had been trying for a couple of years and I used both Eastern and Western medicine to help prepare my body for successful conception and implantation (more about our preconception journey in my coordinating video below if you’re interested in hearing more).  You can imagine our absolute shock and joy at finally getting that BFP (pregnancy lingo for Big Fat Positive) in early May!  I woke Don up by showing him the positive pregnancy test (you can tell it was early by how delirious we both look in that picture 😉 ).  It was a happy and beautiful day for both of us as we’d been working towards that moment for some time.

We ended up telling our parents and siblings within the next 2 weeks, before my first prenatal appointment at 6 weeks.  My doctor wanted to see me early due to some of the issues I had with conception.  I was a ball of nerves going into that appointment, because I knew it would definitely show if I had a viable pregnancy.  I had an ultrasound first where we got to see the teensy tiny embryo and its visible fluttering heartbeat.  The wave of relief that washed over me at that moment was incredible.  I had the usual barrage of first prenatal appointment blood and urine tests and they also weighed me and took my blood pressure.  All looked good!

I actually injured my back earlier that morning.  By the time we left the doctor’s office I could barely move and I was flat out and in quite a bit of pain once we got home.  Poor Don had to carry me from the bed to the bathroom and back, I was so incapacitated.  Later than night I started bleeding and I thought I had lost the pregnancy.  The bleeding only lasted for about an hour and tapered off, but I was absolutely devastated.  Even Don was concerned and he’s usually unflappable.  By the morning I was just spotting.  We called the doctor who wanted to see me right away.  They performed a second ultrasound and much to our surprise and delight, the baby was absolutely fine, its little heartbeat still fluttering away!  They located a blood clot in my uterus, which they determined was not actively bleeding anymore.  It wasn’t large enough for major concern, but they scheduled me for another ultrasound in a couple of weeks just to check up on it.

I spotted continuously throughout the next four weeks.  This is where my first trimester anxiety was rooted.  I am a worrywart by nature and the first trimester is a nerve-wracking time for many since so much could go wrong, but the spotting made me a ball of nerves.  The doctor had assured me that spotting, so long as it is brownish in color, not heavy, and not associated with pain, is not a concern.  I learned that 20% of women will experience unexplained spotting or bleeding throughout their pregnancy, especially in the first trimester.  There’s really no way to determine exactly what the cause is in most cases.  Regardless of having and understanding this information, I was still a wreck. 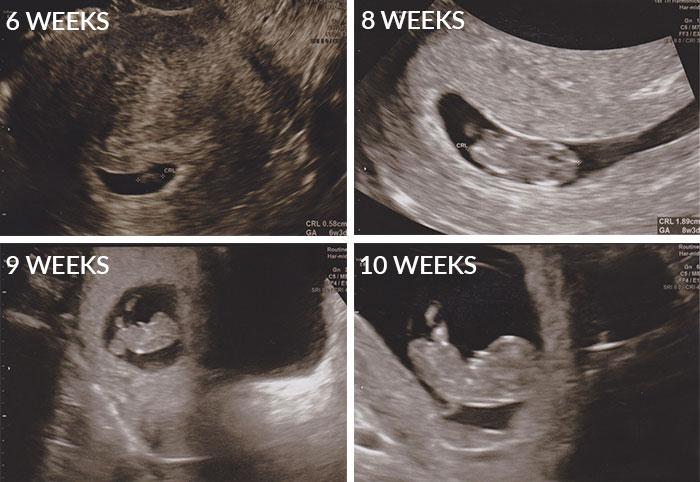 I went back in for another ultrasound at 8 weeks and again experienced that flood of relief when I saw our baby, now officially a fetus, on the screen.  We actually got to hear the heartbeat as well which was amazing!  The baby was measuring on target for our projected due date of early January and all looked well.  They could see the clot was still there but inactive, so it wasn’t a cause for concern.  This helped relieve my anxiety a little but, but I was still spotting regularly so it didn’t erase it entirely.

Just one week later I experienced another bout of bleeding (bright red as opposed to the brown of spotting).  It started in the afternoon the day after I flipped into 9 weeks.  I bled for about twenty minutes and then it tapered off.  An hour and a half later it started up again.  This cycle repeated itself three or four times and by the end of the night I was a complete wreck.  I didn’t understand what was happening, if the baby was ok, what it meant that the bleeding was coming in such uniform waves.  It was too late to call the doctor’s office, which was closed, and both Don and I decided it wasn’t a medical emergency, because I wasn’t in any pain.  I was still completely panicked, of course.

We called first thing the next morning and once again they wanted to see me right away for another ultrasound.  Once again, we got to see that the baby was ok and heard its little heartbeat.  The relief was overwhelming this time and more powerful than any of my other experiences before.  It was amazing to see how much our baby had developed in just one week since my last ultrasound!  I thought it kind of looked like a little beaver (in the cutest way possible).  The clot was still visible, but again, not active anymore and not of concern.

I had my second prenatal visit scheduled for the following week at 10 weeks and they added an ultrasound to that appointment to check on the clot and also, I think, primarily for my peace of mind.  This was a much more relaxed experience, as my spotting had started to taper off over the last week and the previous ultrasound had provided so much relief.  The baby had developed even more in just one week!  This time we could see a much clearer outline of its body with distinguishable facial features as well as little hands and feet with wiggling toes.  The baby was very active during the ultrasound and we could see it kicking its little legs.  Don swears it waved at him!  I had the usual urine, blood pressure, and weight checks.  We also decided to do an optional chromosomal abnormality test at that time, so they drew my blood for that.  The results came back a week later negative.  Good news!

The spotting stopped by the end of my 10th week and I haven’t had any since.  My anxiety also tapered off and by week 12 I was feeling much more confident and at ease.  I was so nervous for the first twelve weeks that I barely let myself talk about or research my pregnancy.  Now that I feel more confident, I’m enjoying these things, including reading books about pregnancy and infancy, surfing the web for infant-related product reviews, and starting to dream up the nursery.  Now it’s time for the fun things!

I had my third prenatal checkup at 13 weeks, which was a pretty low key appointment where they just checked my urine, blood pressure, and weight.  I also got to hear the baby’s heartbeat again from a doppler machine.  My next ultrasound isn’t scheduled until my 20 week checkup, which is the normal timing.  My doctor’s confidence is reassuring.

Aside from the spotting and bleeding incidents, I was fortunate to not have any other severe first trimester symptoms.  While I did experience some intermittent queasiness and tiredness, it was nothing unmanageable.  I believe my weekly acupuncture visits and specially tailored Chinese herbs kept those symptoms at bay.  My most noticeable and consistent symptom was bloating, which persisted throughout the entire first trimester and has just started to wane.  Luckily, it was painless unless I was wearing pants, so I invested in maternity jeans early on.  I was going to have to buy them anyway and now I’ve gotten even more use out of them.  I’ve gained five pounds to date.

If you’d like to hear more about our preconception journey and my first trimester, check out this video:

I’m hoping to post a weekly update in blog and/or video form and would love your feedback on what kind of pregnancy stats you might be interested in seeing.  I also hope to share other pregnancy-related content, including hauls, my new skincare regimen, a look at my pregnancy journal, and others.
Please leave requests if you have any!

My pregnancy content will not replace my usual content.  I decided to take a mini break from vlogging this week, but I will be back to my normal three weekly posts next week in addition to any pregnancy related content.  I’d love any advice, product recommendations, or book suggestions you may have.  I am so excited to add this to the mix and can’t tell you how much joy it brings me to be able to share with you!
Happy Day 🙂