It’s time for me to buy a new vlogging camera and as usual I am stuck on my decision.  I don’t like to commit to a big purchase unless I am 100% certain about my choice.  I’ve been using a Canon PowerShot ELPH 300HS for a couple of years now with great success.  Unfortunately, it’s gotten pretty banged up lately and needs to be replaced.  I like to buy my cameras from Best Buy, because of their great extended warranty options.  Luckily, my current camera is still covered under the 2-year protection plan I originally purchased for it.  The problem is that it needs to be sent in to the servicing center and I would be without a vlogging camera for 2-3 weeks.  That might not sound like a very long time to most people, but in the life of an almost daily vlogger it might as well be an eternity.  My parents really need a new camera, so I decided I would go ahead and purchase myself a new one and then give them whatever replacement or refurbished camera Best Buy sends back to me under my 300HS warranty.  The issue now is what new vlogging camera should I purchase? 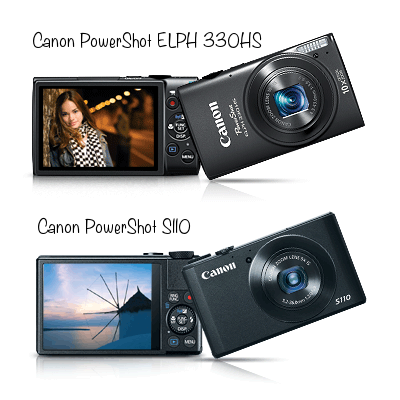 I am a Canon camera girl through and through, which makes picking a brand easy enough.  I love the convenience of the PowerShot line, which features small-sized point and shoots with big features.  Of course, I need a camera that shoots in HD for high quality videos.  I narrowed it down to two of Canon’s newer releases.  The first option is the latest version of the camera I’m currently using, the Canon PowerShot ELPH 330HS (photo source, listed at $229.99).  This is so new that there aren’t many reviews on it yet, which I tend to rely on quite a bit when making big ticket purchases like this.  The second option is the Canon PowerShot S110 (photo source, listed at $449.99), which packs a lot more punch into what settings it offers and capabilities it has.  Initially, I wasn’t really considering the S110, because it’s quite a bit more expensive than the 330HS .  The reason it is a split decision now is that the S110 is currently on sale for $329 at Best Buy where I can purchase the extended warranty I like so much for it.  The 330HS isn’t offered at Best Buy yet.  Plus, I know many other YouTube vloggers use and love the Canon Powershot S100, which is the S110’s predecessor.  The S110 also gets rave reviews, whereas the 330HS has none as of yet.

Any thoughts from my fellow camera enthusiasts out there would be greatly appreciated!

After further research as well as considering your input (thanks for that, btw!) I decided to go with the Canon PowerShot ELPH 330HS.  I’ve been watching videos from some of the YouTube vloggers that I know who use the S100 and S110 in the past few days and noticed a bit of audio interference due to the autofocus.  I also read several reviews that commented on this, which helped me decide to stick with the ELPH line, since I haven’t had that particular issue with my 300HS.  The 330HS isn’t available for shipping yet on Best Buy, so I decided to purchase it through Amazon.  Not only did I get the camera for a slightly reduced price ($218 as opposed to the $229 list price), I get free 2-day shipping as an Amazon Prime member.  I also decided to try out the 2-year accidental warranty from SquareTrade offered through Amazon for $39.40.  A similar warranty from Best Buy costs $49.99.  All in all, I saved a bit of money ordering from Amazon and decided it was worth trying out a new accidental warranty provider as well.  I should be vlogging with the new camera this weekend!  I’ll let you know my thoughts 🙂

*I am not affiliated with Canon.  All opinions are my own.*