Welcome back to another Book Nook where I share my thoughts on my current reads.  After finishing Confessions of a Shopaholic I was still in the mood for chick lit, but with a bit more depth.  This book was just right to suit that mood.

Please be advised that some of the links provided are affiliate links and I do receive a small commission if you make a purchase using those links.  I very much appreciate your support of this blog in doing so! 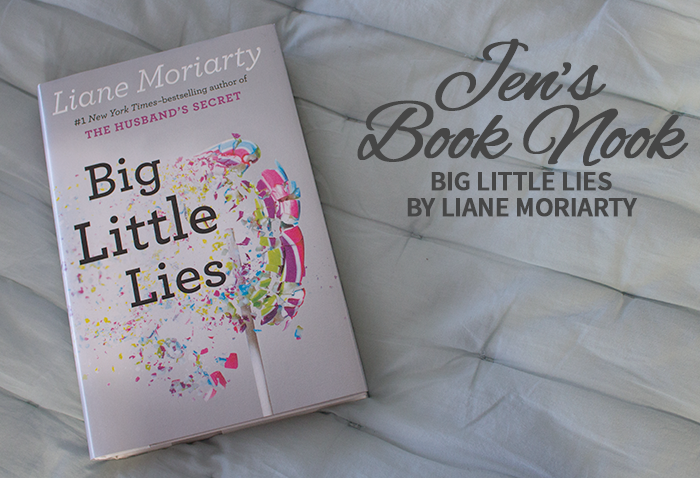 I decided Big Little Lies by Liane Moriarty was the perfect choice keeping this in mind.  I had high expectations for this book as I remembered thoroughly enjoying The Husband’s Secret, also by Moriarty.  She has a distinct way of turning what could be just another mediocre chick lit story into a juicy plot filled with twists and intrigue.  It’s not all thrills, however, as Moriarty manages to inject a lot of depth and emotion into her characters.  Covering all of that in one fast-moving, attention-grabbing novel is no easy feat.  I applaud Moriarty’s ability to do all of that with grace.

One of the things I like best about this story is that it follows seemingly ordinary people, predominantly young families living in a quiet coastal town in Australia, that seem rather unremarkable at first glance.  Moriarty lifts the curtain for the reader to reveal the intricate complexities that people work hard to keep hidden in order to “fit in.”  We’re all people with baggage, after all, but no one really like to admit that openly.  The way that Moriarty brings depth to her characters is in her carefully thought out timing with what bits she reveals.  This kept me intrigued with the storyline as it had a natural flow to it, but also allowed me to connect deeper with the main characters as their truths were revealed in stages, just as you learn things about people you grow close to.  It’s very rare that someone bares their soul to you in one fell swoop; rather, there is a process of gaining trust that evolves over time.  The ability to translate this feeling into a story showcases Moriarty’s grace as a writer in my opinion.

While you might assume Big Little Lies is just another light read after sweeping over the description, Moriarty makes it clear from the very beginning that it is not your average chick lit.  She starts by providing a glimpse of the climax of the book within the very first chapter, after which she backtracks to six months before that fateful school trivia night.  Within the first five pages, you learn that something terrible and unexpected has happened at an otherwise normal school event.  This sets the mystery in motion from the very beginning.  It’s an effective hook that Moriarty continues to flaunt over the course of the story as she inserts snippets of conversation from that fateful night at the end of most chapters.  As a reader, you are constantly reminded that there will be a climactic event and the reasons behind it and exact people involved are revealed to you piece by piece.  It’s mystery and it works!

I really like how Moriarty uses a close third person point of view jumping between the three main female characters, Jane, Celeste, and Madeline, in each chapter.  In this way, she provides the reader access to three very different experiences along the same timeline.  I was able to understand the backstories and motives of each of these three very different women.  I felt like I better understood the many pieces of the puzzle thanks to Moriarty’s use of this literary technique.  It also allowed me the opportunity to get to know the characters on a deeper, more personal level, which added to my overall investment in the plot.

I really enjoyed this book and would highly recommend it as well as The Husband’s Secret to anyone who enjoys stories about the connections we share, whether we’re aware of them or not, in communities.  The added plot twists and mystery that Moriarty infuses in her work adds to the intrigue.

Just finished: Inferno by Dan Brown
Next on my list: Water for Elephants by Sara Gruen

Please keep in mind that these are just my opinions and while we may disagree, it can be fun to share our different points of view.  I am very interested to hear your thoughts if you’ve read this book.  I’d also love to know what you’re reading now and any book recommendations you have.
Happy Reading!