Aloha, friends!  Don and I just returned home from twelve glorious days spent in Hawaii for our babymoon/10th anniversary celebration.  We had such an amazing time!  I thought I’d share some photos and a bit about our vacation with you.

Don and I actually honeymooned in Maui ten years ago, which was why Don suggested it as a fitting 10 year anniversary celebration location.  Back then, you could catch a direct 8 hour flight from Chicago to Kona, but sadly those flights are no longer offered.  We left super early in the morning for the long journey to Hawaii, which first stopped in LA.  We flew Virgin America for the first time on this leg.  The purple vibe was interesting!  From LA, we flew direct to Maui.  It was a long travel haul, but the five hour time difference allowed us to arrive in Hawaii in the afternoon on the same day.

The Four Seasons knew we were celebrating both our anniversary and our babymoon and they left us a bottle of sparkling cider as a gift.  The cleaning staff also made our stay special with little touches like arranging our leis in a heart as well as my Snoogle (a pregnancy pillow and yes, I did bring it all that way with me).  I find that little details like these can actually have a big impact on the quality of my stay.

We were both pretty tired from our travels, but we wanted to enjoy the beautiful Maui sunset outside.  After getting settled in our room we headed down to the lobby bar where they serve fresh sushi and other bites along with tropical refreshments.  We were seated with a perfect view of both the sunset and a ukulele player and hula dancer who were entertaining the crowd with traditional Hawaiian music and dance.  What a wonderful way to start our trip!

We both woke up super early the next morning and had some time before the breakfast buffet opened so we took a sunrise walk together on the path along the coast.  The buffet breakfast at the Four Seasons Maui was incredible!  They made the best pancakes to order that I’ve ever had.  I had one every single day!

Hawaii was experiencing unusually humid and hot weather during our first week there with very little of their signature trade winds, so early morning ended up being the best time of day to get a walk in.  We didn’t mind the heat and humidity, which was actually not unlike Chicago summer weather, and were able to stay pretty cool by spending a lot of time in the water.  I’m not normally big on juices, but I couldn’t resist the amazing tropical concoctions they offered at the pool and restaurants.  Pineapple lemonade and coconut lemonade were my favorites!

Our anniversary happened to fall on our second full day in Maui and Don had planned a special day for us to spend together.  In the morning, we went on a spectacular Blue Hawaiian Helicopter tour.  Neither of us had been on a helicopter before and we were both pretty excited about it. 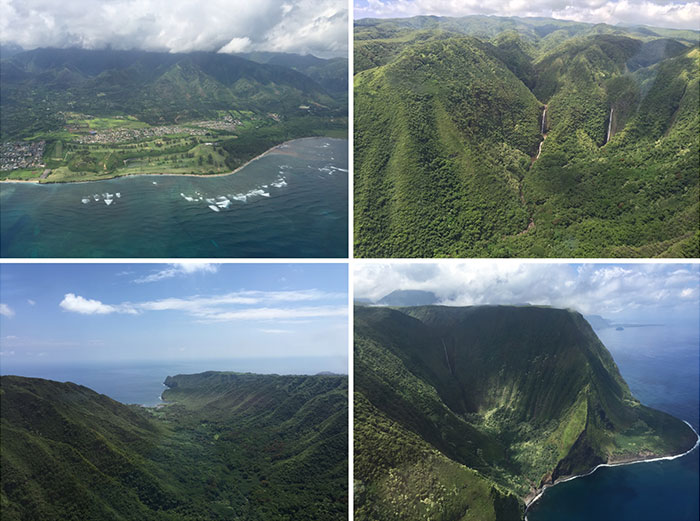 We had originally booked the Maui island tour, but significant cloud coverage over Haleakala, the active volcano on the island, changed our pilot’s route.  Instead, he took us over to Molokai with its amazing 3500 foot sea cliffs, waterfalls, and dense rainforests.  It was an incredible experience and we’d both highly recommend it, so long as you’re not afraid of heights or small aircrafts.

Don had sweetly arranged for a beautiful bouquet of flowers for me in celebration of our anniversary.  We exchanged cards and relaxed together in the afternoon before heading down to an alcove just above the beach on the Four Seasons property for a private romantic dinner.  The staff had beautifully decorated our table with fresh local flowers and candles.

The gorgeous sunset view was the icing on the cake!  We enjoyed an amazing feast together.  It was the perfect way to cap off an amazing day!

A couple of days later we went on a guided hike in East Maui with Hike Maui.  Our guide, Kahi, was incredibly warm and welcoming as well as super knowledgable about the local flora and fauna and Hawaiian history.  Our 6-hour adventure was extremely informative as Kahi guided us through a PermaFarm where 92% of the vegetation is edible.  We hiked to several waterfalls, which we were able to swim at.  This was definitely another highlight of our trip and another recommendation from us to anyone looking for a fun outdoor experience.

We fully enjoyed the Four Seasons amenities when we weren’t out and about off property.  The hotel has three pools and beach access.  There’s great snorkeling right there.  We actually saw four sea turtles one day in the water!  Don thoroughly enjoyed the golf courses on property, as well.  The food at the hotel restaurants features local fare.  While we had planned to dine off property, we found there was such a great variety we didn’t need to go anywhere else.  It was a perfect week in paradise!

We headed to the Big Island halfway through our trip, which we had never been to before.  We stayed at the Four Seasons Hualalai, which is located on a lava field in beautiful Kona.  While it is still very much a tropical island like Maui, the landscape in Kona is much different with the abundance of black lava rock.  The resort incorporates this rock beautifully into its architecture.  The Four Seasons Hualalai is very different from the Four Seasons Maui.  It is more spread out, bungalow-style, and is overall quieter and more isolated.  It’s also absolutely stunningly gorgeous!  Just like in Maui, we were greeted warmly with leis and fresh beverages.  The staff left us some babymoom treats in our amazing suite.

We had planned to get out and see more of the island but we ended up staying put at the resort for the most part due to some weather complications during our week in Kona.  We were fortunate that the resort was located in a spot that wasn’t hugely affected by the rains and any effects from the earthquake in Chile, but those circumstances did prevent us from doing a snorkeling boating outing we had planned as well as local hiking and another helicopter tour.  To be honest, neither of us were disappointed by this, because we had such an amazing and relaxing stay at the Four Seasons Hualalai that we didn’t feel as if we were missing out on anything.  Thankfully, the trade winds finally returned, cooling it off significantly on the island.

The resort had similar onsite amenities to that in Maui, with four pools to choose from as well as beach access.  One of the pools is actually a stocked snorkeling habitat with 70 varieties of fish and a 20 year old eagle ray.  We were also able to snorkel right off the beach as well and enjoyed seeing the sea turtles come to shore to sunbathe and rest in the afternoon.  Don had a blast playing the golf course on property where he shot a 68 one day, his record low!  The food on property was amazing and diverse.  And of course, we could never grow tired of the gorgeous sunsets every night. 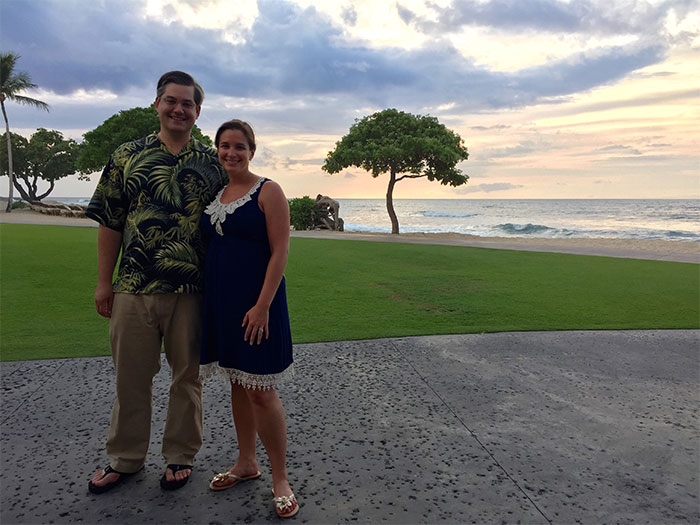 It was such a treat to just relax and unwind together in this beautiful place.  I am so grateful we were able to spend this time together celebrating our marriage and the upcoming arrival of our Baby Girl.  As much as we enjoyed our romantic retreat, we’re both super excited for this next chapter of our lives and can’t wait for our new adventure to begin!

I vlogged a bit, mostly during the Maui portion of our vacation, if you’re interested in seeing more:

I hope you enjoyed this glimpse into our babymoon trip to Hawaii.  I’d love to hear about where you babymooned or honeymooned if you care to share!

* This is not a sponsored post. All opinions are genuinely our own. *