Late last month I had the great fortune of being able to attend Swiss Days, a craft fair held annually close to our family vacation home in Utah.  We’ve never actually been in Utah when the fair is held and I was excited to see what the buzz was all about.  I had no idea how packed it would be, even though I chose to make my visit very early on the first day.  The crowds kept me from lingering or getting very close to any of the booths, with the exception of one that stood out to me – the In A Pikle booth.  I first heard about In A Pikle many months ago when someone left a link to the website on my Facebook Fan Page.  I was intrigued by the concept and made a mental note to investigate further at some point down the line.  Once I saw the booth at Swiss Days, I decided to purchase one of the kits for review.

As some of you may already know, I have my own little bag of necessities I like to keep in my purse, which I call my Walking Pharmacy.  I call it that, because it basically contains all of the just-might-need-it items I would run into a pharmacy and grab in a pinch.  In A Pikle is designed to function in a similar manner, except that it comes stocked with some basic items instead of picking and choosing for yourself in your own pouch, case, or bag.  Let’s take a closer look at what came in my In A Pikle box:

I picked the Dill Pikle in the paisley print complete with the Starter Pak.  The Pikle comes unassembled with the cover, three interior bags, the Starter Pak, and instructions on how to pack it.  I like that you can assemble and pack the Pikle yourself.  In A Pikle sells six different Refill Paks to suit your individual needs.  It’s also possible to order replacement items individually (or à la carte as they say on their website).  You can, of course, fill the Pikle with your own items as well.

The cover is constructed of a mess-proof laminated fabric with (and I’m guessing here) a nylon interior.  It has two snaps, which secure the three interior zip bags included in the Starter Pak and a few elastic bands to secure larger items.  An adjustable outer flap secures the Pikle with a magnetic closure.

An interesting anecdote – on my way home from the fair, I saw our good family friends taking a walk and I pulled over to chat.  I showed them my new Pikle purchase and my friend Lynne remarked how it reminded her of emergency kits they used to make in the Relief Society out of hot pads, snack bags, and buttons to close.  When I started perusing the In A Pikle website in more detail later on, I read that those very hot pad creations were the inspiration for the Pikle.  It’s a small world after all! 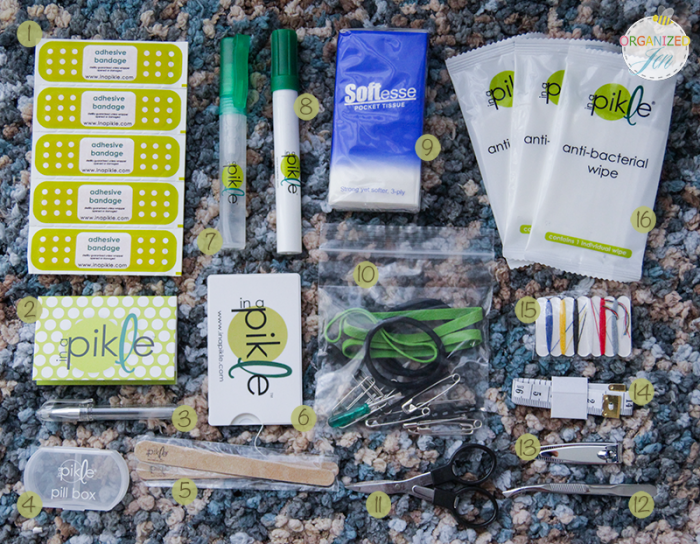 Here is what is included in the Starter Pak:

I packed my Pikle per the handy directions included.  It’s extremely easy to assemble and takes only a minute or two to fill.  The clear zip pouches make it easy to see the contents.  I love how the Pikle implements micro-organization, making it a breeze to locate what you want in a pinch without having to rummage through an open style pouch.  Having the Starter Pak is great if you’re not sure what you want to keep in your Pikle.  Once you start using it you can see what items you reach for, which ones you can pull out, and what you might like to add.

Once packed with all of the items in the Starter Pak, my Pikle is pretty stuffed.  It closes easily enough, but I think it would be a challenge to fit in additional items without removing some first.  I like that the Pikle comes with a handy zipper on the back to securely store valuables, change, or even money and credit cards.  As much as I like the Pikle, I still would choose to carry my own Walking Pharmacy in my purses, because I personally prefer to keep a pouch that is entirely enclosed in my handbag and I like the flexibility of my own options as opposed to the relative rigidness of the fully packed Pikle.  That being said, I think the Pikle would be great to keep in a desk office, a gym bag, school locker, or even in the car for those in-a-pinch moments.  I think In A Pikle is an example of practical organizational design at its best.

I wanted to share the joy of the Pikle with you and am excited to host a giveaway!  There will be TWO winners.  Each will win the Dill Pikle in Paisley Print with the Starter Pack exactly like the one I shared in this post (except brand new and unopened in the original packaging of course!).  Follow the directions on the Rafflecopter widget below to be entered to win.  The giveaway is open internationally and will run until Monday, September 30, 2013 at 6 PM CDT.  I will contact the winners directly via email in addition to announcing them on this blog post and on Twitter.  Good luck!

Congrats to Sherryl and Susan on being selected as the winners of my In A Pikle Giveaway!

Sometimes Rafflecopter experiences technical difficulties.  If you can’t enter for some reason, try again later and it will probably work.

*I am not affiliated with In A Pikle.  I purchased all items shown myself, including the giveaway prizes.  All opinions are my own.*