As many of you know, I held my first charity auction last November to raise money for Stomp Out Bullying, an organization that addresses and teaches both kids and parents about bullying and provides support for victims.  The actual process of receiving the funds from those sales and sending them along to the charity took much longer than I originally anticipated.  Now that the funds have finally made it to the organization, I wanted to provide a proper recap of the auction for you and share my experience.

We raised $3,841.82 for Stomp Out Bullying.  I was floored by the response and support my little auction received!  I had thirty listings total (which you can see on my original announcement post here if you like), which included mostly an assortment of my rather large handbag collection as well as some sunglasses and jewelry items.  I chose to use eBay’s Giving Works as my charity auction platform, which allows you to designate anywhere from ten to one hundred percent of proceeds to one or more of the verified charities listed on their site.  I earmarked 100% of the proceeds of my auctions to go to Stomp Out Bullying.  Once the auctions were live I was shocked by the amount of traffic and bids they received!  All in all, the fundraiser was a success, with just two listings not properly sold.  The auctions closed in mid-November.  After I sent out the items to the winners I had to wait about three weeks for the funds to hit my Paypal account.  Once they did, I was easily able to send the money directly to Stomp Out Bullying through PayPal’s Giving Fund program.

At this point I decided to reach out to Stomp Out Bullying, because I wanted to be absolutely sure they received the funds from PayPal’s Giving Fund.  They were delighted to learn of my successful charity drive and explained that it could be months before they saw the funds, but that they would let me know when they did.  I decided to hold off on sharing my recap with you until I was certain the money had been successfully delivered to the charity.  I received a wonderful letter earlier this month informing me that the funds were finally deposited to Stomp Out Bullying: 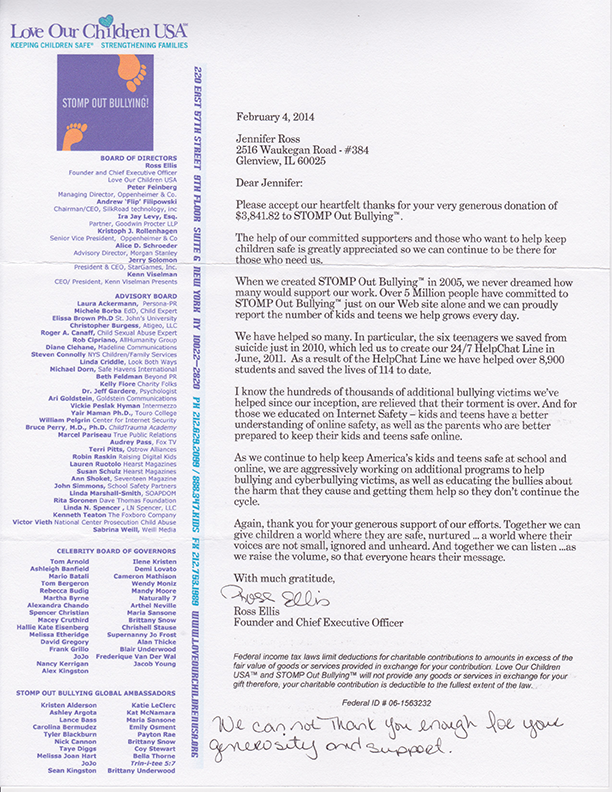 Please do not be concerned – the address listed on this letter is my public mailbox, not a personal residence.

If you’d like to hear more about my first charity auction experience, check out this video:

I hope to hold another auction this fall, including the two bags that didn’t properly sell (the Kate Spade and Disney Dooney & Bourke if you’re curious), as well as several other bags and items I am tucking away.  I want to thank each and every one of you who participated in my fundraiser through bidding on the items or just offering your support and encouragement.  Your support is benefitting an amazing organization that provides crucial support and learning for our children.  Big Hugs!

* I am not affiliated with Stomp Out Bullying or Love Our Children USA, just a supporter.  All items I sold in the auction were provided by me. *